The urban future lies in the countryside

Is that Stalin rolling toward us? Yes, that man-sized cardboard figure on the electric cart in New York’s world-famous Guggenheim Museum is indeed Stalin. But why is Stalin at the Guggenheim? Because the Soviet leader reshaped large parts of the Soviet Union after World War II, and this exhibition is all about reshaping the land. The exhibition – Countryside: The Future, which due to the corona pandemic can only be shown digitally at the moment – spans the countryside, the landscape, the villages, and the history of the world and humanity. The path up the rotunda takes you from the ancient Romans and Chinese through Marie Antoinette and her villas to the conquest of America’s prairies by white settlers; from Hitler’s highways to Chile and Pinochet, and from nuclear fusion to mammoths in Siberia, which can now be bred because the soil, freed of permafrost, has now released their DNA, along with toxic methane gas, unfortunately.

The exhibition – an enormous multimedia installation full of photographs, maps, tapestries, video projections, paintings, patterns, explanatory panels and screens – spans six levels and was conceived by Rem Koolhaas, the Dutch architect, architectural philosopher, former journalist and screenwriter who now teaches at Harvard University, together with his colleague Samir Bantal and Troy Conrad Therrien from the Guggenheim. Also involved were architects from OMA, the Office for Metropolitan Architecture founded by Koolhaas in Rotterdam, as well as students and scholars from Yale University, the Harvard Graduate School of Design, the University of Nairobi, Kenya, Wageningen University in the Netherlands, Waseda University in Tokyo, and the Central Academy of Fine Arts in Beijing. Perhaps this large number of people involved is enough to explain the wealth of material on display. Koolhaas – who has already designed the Guggenheim Hermitage Museum in Las Vegas – became famous in the U.S. through his book Delirious New York: A Retroactive Manifesto for Manhattan, so there is a certain irony in the fact that a verified urbanist is now enthusiastic about non-urban life. Koolhaas believes the future is not in the city, however, but instead in rural areas, where interesting changes are taking place. In 2014, according to UN statistics, half of the world’s population lived in the countryside. And even the surface of the earth is 98 per cent non-urban. The exhibition’s organisers have a very broad scope here; from the Sahara to the Himalayas to the Barrier Reef, and from a university campus in Silicon Valley to an industrial park near The Hague. 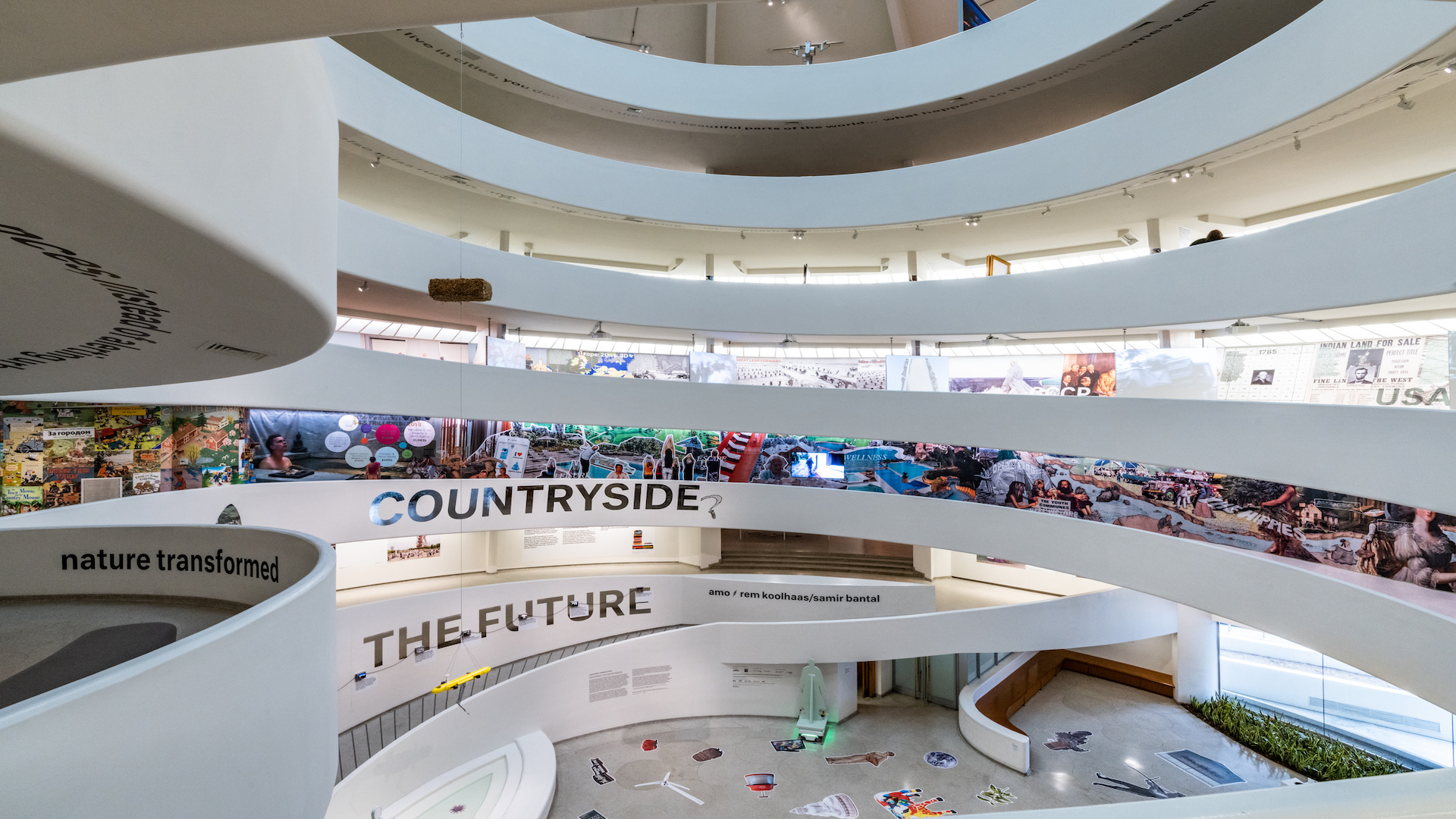 At the beginning of the ascent of the rotunda,visitors are welcomed by a Swiss village near St. Moritz where Koolhaas once spent his holidays. The size of the medieval gates in the village determine which vehicles can pass through. Today, wealthy urban dwellers have moved here from Milan, and although the doors of their new houses are based on the medieval design, the dimensions are completely different. This is an example of how gentrification and technology are reshaping rural areas, i.e. the rediscovery of the village as a living space is based on technical progress. The dramatic changes brought about by the rise of Africa and China, for example, are linked to the Internet; something that’s still little known today, says Koolhaas – or at least something most urban dwellers haven’t taken notice of. To remedy this, the exhibition is packed with technological gimmicks, from an underwater drone to a mobile tin toy to a high-tech tractor outside the door that is controlled by an iPad, as well as not so high-tech, i.e. Stalin on wheels. It’s no wonder the aesthetics of the exhibition reminded the New York Times of that of a Soviet World Expo pavilion.

The Internet, robots and artificial intelligence have all enabled people who live in an isolated fashion far away from cities to communicate and develop new social models. “We don’t have to fear technology,” says Koolhaas. For example, in Tanzania, where banks are being replaced by a payment system using smartphones called M-Pesa, or in China, where farmers not only display and offer their products on the Internet, but also sell and ship them. The landscape in Africa is also being changed by modern travel habits, and gorillas are now marvelled at rather than being slaughtered. In Qatar, the Middle Eastern kingdom surrounded by desert sands, technology (and oil money) was used to quickly set up its own agricultural system. For a long time the only thing Qatar produced was camel food for races. Food was imported from surrounding Arab states, and especially from Saudi Arabia, until 2008, when the sheikhs cut off exports to the Gulf State. As a consequence, the Emir of Qatar switched to imports from Turkey and Morocco and had 4000 cows plus stalls and milking machines flown in overnight. Today Qatar sells mozzarella to US military bases in Iraq and Afghanistan. Modern, tiny nano-robots are also reshaping the new landscape. Vegetable and fruit cultivation in Holland, for example, is now computer-controlled and extremely efficient: Dutch farmers are able to use greenhouses the size of 23 football pitches. Some, on the other hand, are downsizing by means of “pixel farming”, where computer-controlled mini-drones carefully tend to individual plants in tiny cells measured in square centimetres. Conversely, development is taking place on farms in the United States that have also been retrofitted, where a single tractor can now cultivate a field stretching all the way from the Southwest to Canada. 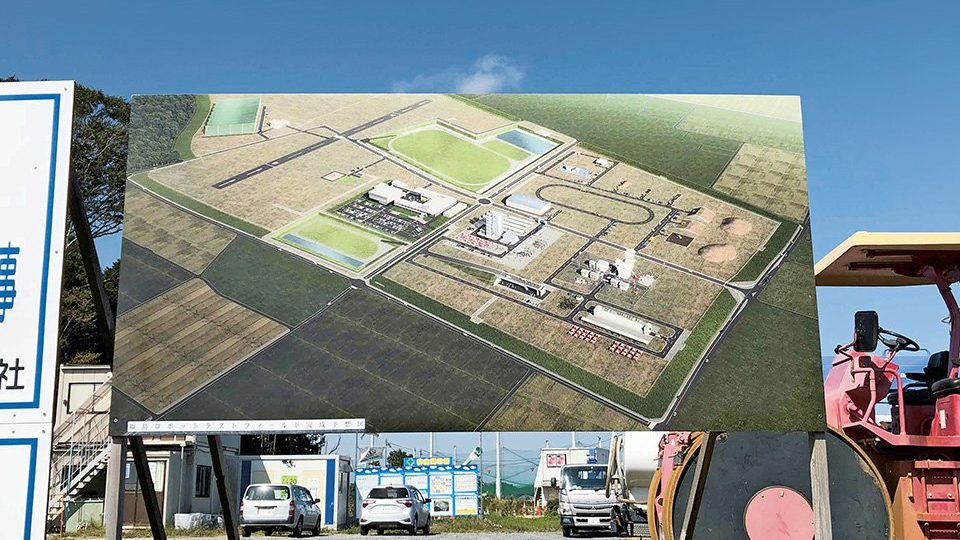 The Fukushima Robot Test Field, built on a perfectly flat 125-acre tabula rasa created after farmlands and houses were washed away by the 2011 tsunami; Copyright: © RK
#tcl_block--article-text

Dictators who don’t care about a few hundred thousand lives are predestined to transform the landscape. After the Second World War, Stalin wanted to transform vast regions of the USSR – from Kazakhstan to the Ukraine – in order to provide more food. He sent a million students to the countryside, had “unreliable elements” deported to the gulags and diverted rivers in Siberia, even trying – in vain – to turn them around. The project wasn’t abandoned until Mikhail Gorbachev came to power. Following Stalin’s example, Chinese Chairman Mao also launched his Great Leap Forward, which cost the lives of up to 70 million Chinese, and Libya’s Muammar Gaddafi had similar megalomaniac ideas. Koolhaas contrasts the Stalinist plans with those of German architect Herman Sörgel, who in the 1920s developed a plan to connect Africa with Europe to form the continent of Atlantropa. In doing so, he would have lowered the level of the Mediterranean Sea by a hundred metres and built dams near Gibraltar and the Suez Canal. This remained theory, however, unlike Hitler’s construction of the Autobahn, which, true to the Nazi ideology of worshipping rural people, was intended to raise the standard of living of the rural population to that of urban dwellers. This was followed by the Morgenthau Plan, the de-industrialisation of Germany after World War II, which was proposed by Franklin D. Roosevelt’s administration in the United States in 1944 and subsequently exploited by Nazi propaganda. This would have not only have involved a ban on tractors, but a ban on rearmament as well. 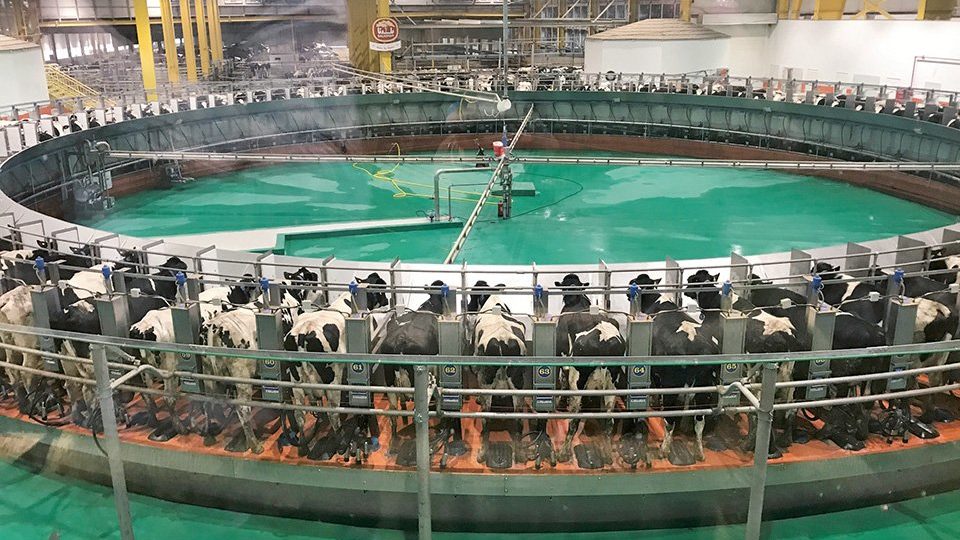 The transformation of the countryside often occurs as a result of immigration. For example, several Catholic villages in Italy were nearly deserted until they were resettled by Muslims from the Middle East, who now offer church services (in return for payment) because the local Catholics have grown to old to do it themselves. According to the exhibition, which has no reports of any problems with this scheme, it has revitalised these rural areas. More dramatic, however, was the immigration that occurred in the American West, where according to the Manifest Destiny’s divine will to give the land to whites for settlement, a whole continent was conquered and “cleansed” of natives in less than a hundred years. This also transformed the prairies from being varied landscapes with grasses, shrubs and millions of buffalo into an agricultural monoculture, which is, however, fiercely defended by today’s inhabitants against “liberal” urban residents. There are not many rural inhabitants to be seen in the exhibition, however. Olive-picking farmers, migrants planting tomatoes, or shepherds herding sheep are really quite rare, and one might get the impression that agriculture nowadays is completely controlled from a mobile phone in an office. 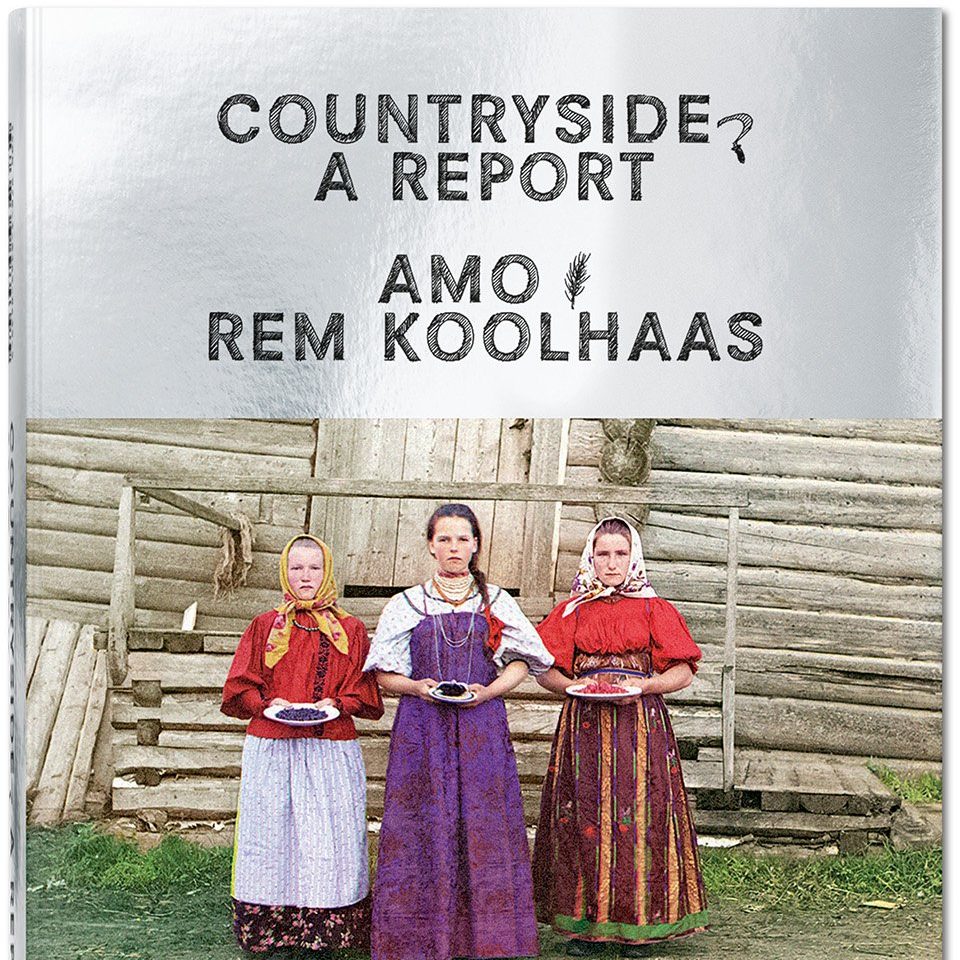 Informationen about the exhibition and its events can be found here: www.guggenheim.org/exhibition/countryside Countryside: The Future runs until August 14, 2020 at the Solomon R. Guggenheim Museum in New York. According to Rem Koolhaas, the exhibition will travel to France, Holland and China, and perhaps even to Africa.

To coincide with the opening of the exhibition, the book Countryside, A Report (Guggenheim Museum and Taschen, 2020) has been published.

Eva C. Schweitzer, D. Phil., is a German author, publisher and journalist. She has been writing from New York since 1998, mainly for the German magazines and newspapers “Die Zeit” and “taz” as well as for the German architectural magazine “Baumeister”. In 2002 she completed her doctorate on the transformation of Times Square.

Comment and discuss this article on our facebook page, or get in touch with the authors or the editors by e-mailing us magazine@urbanes.land.